Is Greensboro the Jeans Capital of the World?

Wrangler Promote "Jeansboro" as the Jeans Capital of the World

In 1897 an enterprising C.C. Husdon left his Tennessee home to seek his fortune. He thought that Greensboro, North Carolina was the place to be with its blossoming textile industry. He quickly landed a job sewing buttons but when his workplace closed he decided to purchase the sewing machines. Using these he founded the Hudson Overall Company. The name was later changed to Blue Bell Overall Company and it was a great success.

Blue Bell later acquired the Casey Jones Work Clothes Company and with it a rarely used brand name. That name was Wrangler. In 1946 Blue Bell started to develop a line of jeans for cowboys in conjunction with the well-known tailor Rodeo Ben.

These new jeans featured innovative details aimed squarely at cowboys. They had felled outseams and inseams together with pockets specifically position for greater comfort in the saddle. There was stitching to the crotch in place of a rivet and the flies had zippers. All that the new jeans then needed was a name. A competition amongst the workers to choose a name produced a clear winner - Wrangler.

Wrangler are still based in Greensboro and have dubbed the city "Jeansboro". The city certainly has a unique place in the history of denim. Last year Wrangler celebrated the first annual Jeansboro Day to honour the city and its role in creating iconic American jeans. They now wish to reinforce the city's identity as the jeans capital of the world by creating jeans sculptures.

A series of jeans sculptures have been produced and these will provide blank canvases for local artists and designers to complete using their original design concepts. Creative people have been invited to submit their ideas and the best entries will be chosen by a judging panel. The winners will then bring their ideas to life using the structures. The completed pieces will be positioned throughout the town and will feature plaques bearing the artists' names. 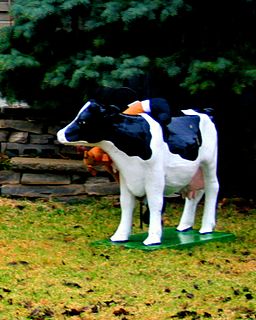 This is a similar idea to Calgary's Udderly Art project back in 2000. 125 fibreglass cows were decorated by artists and placed around the Canadian city as a tribute to the region's cattle industry. The cows were each purchased by individuals and corporations and the resulting revenue was donated to charity. Many of these extraordinary animals remain in the city but not in their original locations. If you would like to see some of these bizarre examples of street art then head to Centennial Parkade on 9th Avenue in Calgary where 12 of the cows now reside. Just so you know, this is a carpark!

I happened to be in Calgary in 2000 and couldn't quite believe my eyes. Frankly, I thought the cows were hideous and so I hope that the artists of Greensboro, or should I say Jeansboro, make a better fist of it. Pink cows decorated in daisies and similar atrocities just look undignified and rather offensive to cows really!

With their Jeansboro competition Wrangler are seeking original designs to adorn their celebratory sculptures. The designs should fall into one of three designated categories.

Greensboro is certainly inexorably linked to jeans culture. Sadly it also boasts a decidedly less appealing side to its history, particularly when it comes to civil rights. The city was the site of the infamous Greensboro Massacre in 1979. This was a clash between members of the Communist Workers Party (CWP) and the Ku Klux Klan which took place live on television. Five CWP demonstrators were shot dead and seven were wounded. Six members of the Ku Klux Klan were later tried for murder and acquitted by an all-white jury. The men concerned and several police officers were later found to be liable for the deaths by a civil court and ordered to pay damages.

You wouldn't believe the perpetrators could walk free when such an atrocity was broadcast live to the world. That couldn't happen in our country could it? No sections of society would be killed live on television, become the victims of police negligence and then the guilty walk free. Oh wait a minute! The Hillsborough Disaster!

Hopefully Wrangler's initiative will raise the profile of Greensboro in a positive way and will produce art worthy of the name. The project is an interesting way to showcase jeans but one hopes that the resulting sculptures are a little more tasteful than those hideous cows!