trend for flared jeans in 2015

The fashion industry appears to have decided that flares are on the way back. A move which is guaranteed to send shivers down the spines of anyone who lived through the 1970's. Back in that darkest of ages the flared, sparkly onesies of the discos were translated into flared denim on the street. Before you come over all nostalgic do remember that this was the era of brown and orange wallpaper, medallion man and Boney M. Clearly an entire generation had suffered a taste bypass and must surely have hoped to be dead and buried before such atrocities were resurrected. What goes around comes around, however, and flares are being promoted as the next big thing. Literally!

The 1970's was definitively the most bizarre decade in the history of western civilisation. The swinging sixties gave way to a period of economic austerity, industrial disputes and deep political divisions. The world seemed to be suffering from a universal bad mood but the younger generation were looking for ways to escape the drabness of it all and so music and fashion headed in a new direction. Excess became the order of the day. It was the era of glam rock and kitsch disco, of Marc Bolan, The Sweet and Saturday Night Fever. Everything in youth culture was loud, outrageous and well, big! So the jeans of the time were big too, at least at the bottom, and we all walked around with huge volumes of excess fabric flapping around our ankles and soaking up any water within a ten mile radius.

If you haven't worn flares before then you should know that they have a tendency to collect water which then migrates up your legs and can even reach your knees on a bad day. The platform shoes which were de rigueur at the time failed to stop the wet look from becoming the norm. The only exception to this was the summer of 1976 which was so hot and dry that there was no water. Everyone was talking about the hot weather that year. Little did we realise that the weather was about to become such a hot topic in the shape of Global Warming. Ironically the 70's were a period when we were already restricting our use of fossil fuels. Not because we were concerned about the climate but because there were so many power cuts that we couldn't actually consume any energy. 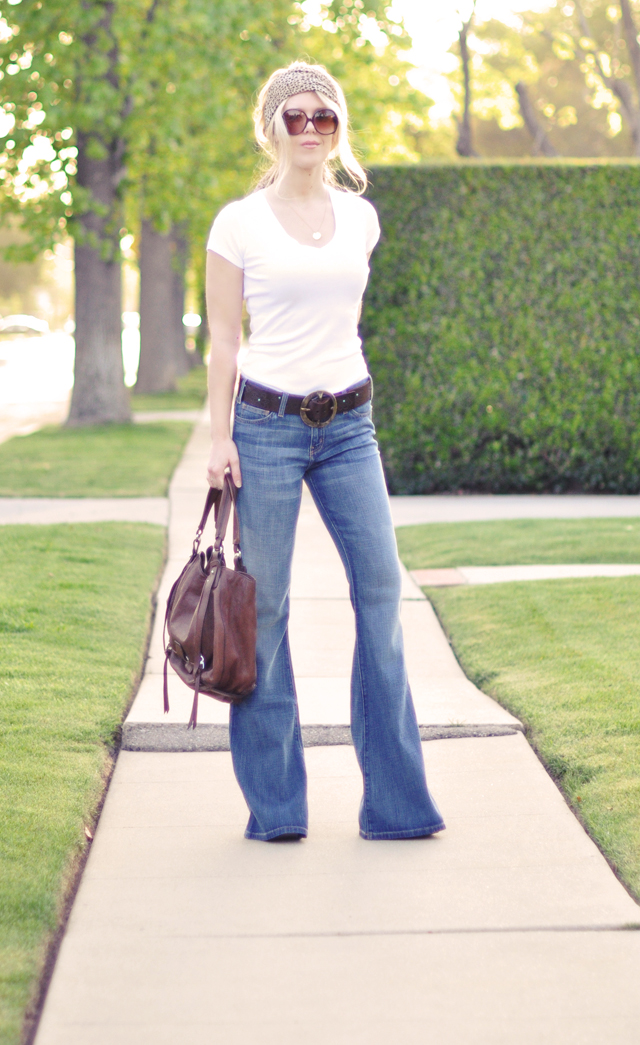 Of course flares eventually fell out of favour. Not because they were soaking up too much water or because they were hideous (which they largely were) but because fashion is cyclical and a rebellion is only ever just around the corner. On that occasion it was the mother of all rebellions that ensued when the Punk movement arrived. We came over all anarchic and started wearing drainpipes and bondage, pogo dancing at gigs, spitting and singing The Kids Are United, which, of course, they weren't.

If flares were very much the product of their cultural context the last time around, why are they resurfacing now? I fear that their renaissance is imminent for much more pragmatic and frankly banal reasons. Fashion designers have to ensure that we ring the changes. There are only so many ways to adapt the style of trousers and jeans and so we are caught in a cycle of rebirth and rejection. It is time for flares to make a comeback simply because designers have failed to think of anywhere else to go but is it really time to ditch the skinnies or the straight legs?

I guess that the answer to that question depends on whether you are a slave to fashion or are more concerned with style which is a different thing entirely. Style is about what looks and feels good on you. It is about what flatters and fits your lifestyle. It is about what you inherently like. Fashion, on the other hand, is about trying to be different from the masses but it is the ultimate paradox. Those trying to stand out generally do so by following the latest trends which means that all they achieve is looking like everyone else who is following those trends. Follow them they do, however, even if they are patently ridiculous and so there is hope for flares after all.

I have become convinced that if the likes of Donatella Versace or Jean Paul Gaultier suggested that we should all wear a swing bin on our heads and team it up with a bin bag and a length of garden twine, then a certain breed of people would do exactly that. They would do it feeling that they were in the vanguard of fashion forward thinking. The rest of us have a little more sense.

So are flares on the way back or are they the swing bins of 2015? This is a hard one to predict simply because there are flares and then there are flares. Wider bottoms have been with us before and they do suit many people well. They balance out wide hips or broad shoulders and conceal fleshy calves so they can look good. It is when flares are taken to excess that they become ridiculous. I can't see the day coming when people want to walk around with all that denim flopping everywhere again any more than I can see Boney M reaching the top of the charts with another hit sung by session singers. New fashions can be experimental but this is an experiment we have conducted before and now look back on with some degree of horror. But then many of today's fashionistas were not even born when flares had their seminal moment.

We can expect to see a raft of celebrity snaps featuring flares. The campaign to convince us is already underway and we are about to be told that skinnies are so yesterday and that flares are this year's must have apparel. I think this is a time when, more than ever, we must think carefully about the jeans that actually suit us. If you look good in flares then wear them with pride. if you don't then stick with what works for you. The real fashionistas are those who set trends not those who follow them. The real winners are the free thinkers who look good in whatever they choose to wear. Let's start a trend for fashion freedom. Now that is something we can really recommend here at Jean Store!