In the 21st century we are more image conscious than ever before. We are also increasingly reliant on technology and our choices there are at least partly dictated by concerns over our image too. We want to be wearing the right clothes and carrying the best gadgets and we spend a great deal of time, effort and money getting the things we want.

Millions of magazine pages, websites and blog posts are devoted to discussing our options and we feed hungrily on this feast of information before making our choices. Style matters with everything from our underwear to our furniture but there is clearly nothing more important to us right now than our jeans and our mobile phones.

The Clash of the Titans

Jeans and mobile phones are now so fundamental to our existence that it is virtually impossible to imagine life without them. They are both the essentials and the fashion titans of contemporary life. Until recently the manufacturers of our favourite garments have had little reason to concern themselves with mobile phone trends and vice versa but times are changing and a clash of the Titans is firmly on the horizon.

Why are jeans and mobile phones on such a dramatic collision course? Well here's the thing. Style matters but so does size and I don't mean the obesity epidemic. Those of a certain age will remember the first mobile phones. Those hideous monstrosities were so enormous that they were barely mobile at all. Gargantuan handsets were partnered by vast battery packs and you needed a trolley to transport the things anywhere. When you used them it looked like you had a house brick to your ear! It all seemed very revolutionary at the time but hardly the stuff of science fiction. Technology marched on, however, just in time to save us all from repetitive strain injury. Phones got progressively smaller until we were all carrying around absolutely miniscule flip phones and sliders. Devotees of Star Trek must have been thrilled that Captain Kirk style communicators had arrived. Scottie, however, was already in the transporter room ready to beam them all up again because everything was about to change. 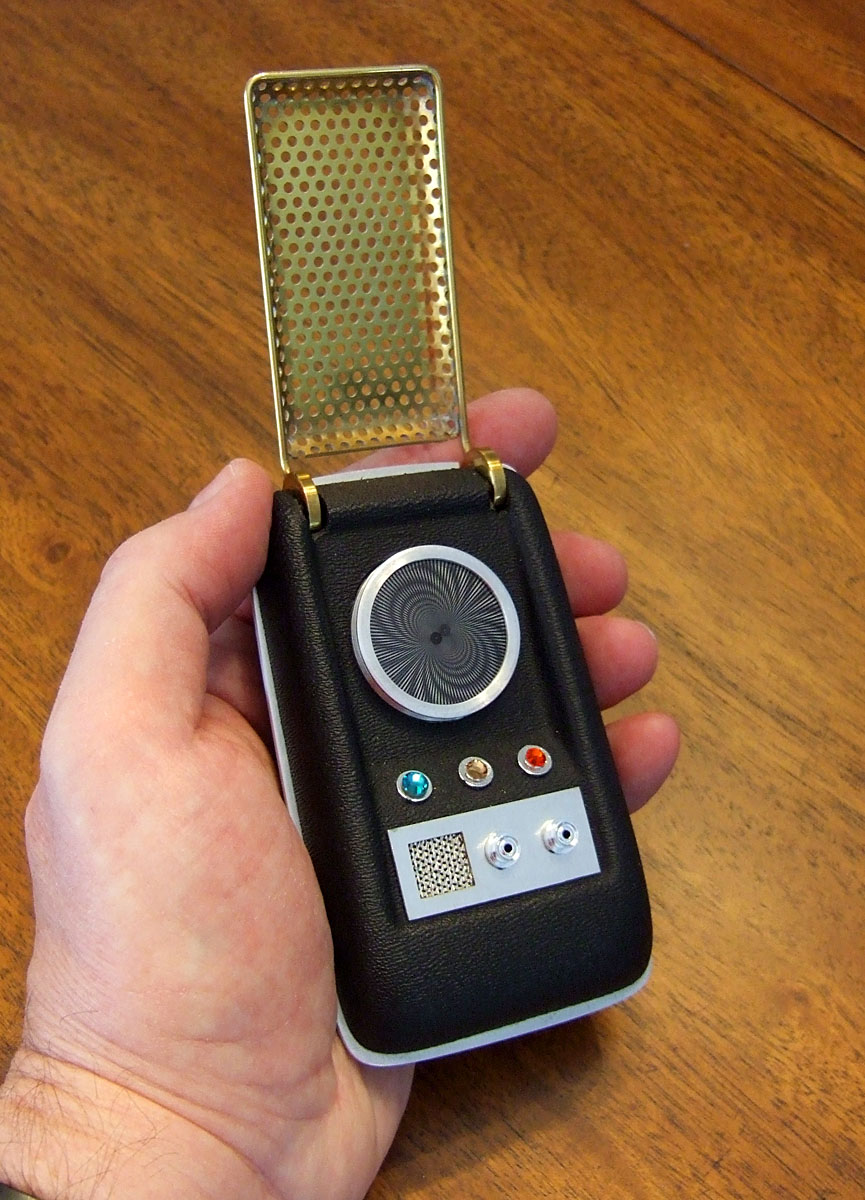 
Those tiny phones slipped easily into any pocket. An epidemic of phone thefts illustrated that that they slipped out again just as easily! Small but perfectly formed was where it was at until phones stopped being merely phones. The smartphone arrived accompanied by an avalanche of apps that made a large screen and therefore a larger handset more desirable. Recent incarnations of the market leading iPhone and Samsung Galaxy are really quite enormous. So enormous indeed that we are having trouble fitting them in our jeans pockets hence the power struggle that I believe is about to ensue.

Many jeans have relatively small front pockets and this is particularly true of women's jeans. Those iPhone 6 Plus's and Galaxy S5's simply don't fit in them or leave unsightly bulges. Having found the perfect pair of jeans, most 'fashionistas' will be less than delighted to have their look ruined by a protruding iPhone6 Plus. The current trend for skinny jeans hasn't helped either as pockets are even more minimalist and that bulge is therefore more pronounced. I wonder where the trend for larger phones is heading? Soon the things will be as big as my tablet and you can't get 9 inches of anything in the front of your jeans, although some men would proabably beg to differ on that point! Talking of bulges and all, but I digress 
The back pockets are clearly an option but are hardly convenient. Theft is a strong possibility if you stash your phone to the rear and it really isn't funny when you sit down! Oddly enough most women don't want their bum to look bigger either! Who would have thought that you might choose a phone because of concerns about your arse? I have spent my whole life trying to conceal my ample posterior only to have my efforts sabotaged by a Galaxy S4!

Of course women do have the option of putting their phones into their handbags but that is tantamount to casting them into a black hole or a worm hole or some sort of hole anyway. (You can tell that I am a women). Then when the stupid thing rings you can't find it amid the mass of other assorted stuff in the bag which is usually enough to fill the average Tardis.

Psychologists say that many poor souls are now addicted to their phones and actually get withdrawal symptoms if they have to do without them. Well I can tell you that there is another syndrome which as yet remains nameless and it concerns phones in bags. There is nothing quite like the stress inducing frustration of not being able to find your mobile in your handbag! Those loons in the street that you encounter occasionally muttering or shouting at nobody in particular and holding their heads in despair are not escapees from the local asylum, they are women who can't find their phones.

Perhaps smartphones will spark a growing trend for man-bags then a phone and a tablet could be carried together, the whole nine inches so to speak.

So larger phones are proving problematic. Will mobiles be getting smaller any time soon? Probably not because of the way we all use them. Images, video and gaming are now fundamental to phone use and so a tiny screen isn't helpful at all. Even those who are not addicted to Angry Birds or who don't regularly download movies would struggle with a tiny screen because shopping online would be less convenient too. After all it is quite nice to be able to see what you are buying before you dive in! There are reasons why smart watches have failed to take off to any great degree and size is certainly one of them.

The obesity epidemic might actually come into play too. Larger, podgy and less dextrous hands struggle with touch screens and even simply handling the phones so we may see more and more people favouring a larger handset regardless of the apps that they enjoy. Then there is the issue of eyesight to consider. Most people over 40 suffer from some degree of presbyopia. This is an age related condition where the lenses of the eye flatten making focusing on things close to your face, especially small details, rather difficult. The older generations are beginning to embrace new technologies and today's youngsters are tomorrow's presbyopia sufferers. Maybe eyesight is another reason why big might indeed be beautiful at least when it comes to mobiles.

So there are many compelling reasons why phones should remain on the large side and the iPhone 6 Plus is a veritable whopper! This phone, however, has raised questions about how large is too large. A new issue has been sent to challenge us and it has everything to do with jeans.

We may want larger screens but we don't want to regress to cumbersome handsets. Inevitably phones are getting slimmer and lighter. Unfortunately Apple seemed to have overlooked the fact that phones spend most of their time in our jeans' pockets when they created the iPhone 6 Plus. This ultra-slender model was partly fashioned from aluminium to save weight but when some people have sat down they have discovered that these phones will bend.

There was initially some debate over whether the iPhones were really bending or if this headline grabbing tendency was actually an urban myth. There is now plenty of evidence to suggest that the iPhones do indeed have a tendency to unfortunate curves and the scandal, such as it is, has been christened BendGate. Social media has been awash with images of mutated phones and there has been a trend for deliberate phone bending in Apple stores which, I should point out, is criminal damage in case you feel like giving it a go!

Another problem has reared its ugly head and this one is jeans related too. The new iPhone design incorporates some white strips to the rear. Apple suggested that these would not feature in the final design as images of the prototypes resulted in questions being raised about the strips. The strips were not considered to be attractive features but nonetheless when the iPhone 6 was launched they were still there. Then users discovered that their unfortunate white bits were turning blue and it wasn't from the cold!

Unsurprisingly, the phones were being stashed in jeans pockets and the dye in the denim was turning the white strips blue. Perhaps white phones or white features of phones were not such a great idea.

It had been beginning to look like phones were going to win the day in the battle for style supremacy. Larger screens were what we wanted or needed but now it is clear that they can be too large, at least if we want to put them in our jeans pockets, and clearly we do. White was proving to be a poor style choice too. Smartphones can only be so big or so white, but what of jeans? Will denim design really be influenced by smartphone sizing?

So are the Jeans designers thinking about the phone issue when they discuss ideas for new styles? Well it would appear that they are. Some labels are admitting that phones are a topic of discussion and others are doing a lot more than talking. Smartphone friendly jeans are now a reality. I/O Denim have a patent pending on their new jeans which feature a smartphone pocket in the leg. WTF Jeans have produced jeans with pockets featuring nano-tech based liquid and stain resistance. The "Smartpockets" provide easy access to your phone and clean your screen, protect it from rain and include EMF shields to protect wearers from phone radiation. Gosh! They have all the bases covered don't they? Storage, moisture protection, accessibility and health. Sadly they have overlooked one thing - style.

The developments sound very interesting but neither of these jeans has exactly spawned a stampede on the part of consumers. It seems that style is king after all as the eminent practicality and high tech nature of these new jeans has failed to overcome shortcomings in their overall look. Reviews have not been kind and I saw one blogger describe the WTF Jeans as "Croatian *************". Oops!

Phones are obviously starting to cause something of a headache for jeans manufacturers but perhaps there is a design opportunity in there too. We love our phones and they are not going to go away or get much smaller by the looks of it. Then again we value our fashion style too and there is clearly only so far we are prepared to compromise in order to accommodate our phones. Jeans which are cool but which are also smartphone friendly are the new fashion Holy Grail. Perhaps it will not be a case of phones dictating denim styling or denim styling dictating the size of phones. The two titans will probably meet somewhere in the middle. Normally I loathe the middle ground as it is usually cop out of sorts but here compromise is a good thing. Phones will only get so big and your favourite jeans will receive clever modifications to make them phone friendly. Denim Nirvana!