how your favourite jeans are made

Putting the Blue into Blue Jeans

These days jeans are available in variety of colours but these most versatile and practical garments will always principally be associated with the colour blue. Even if you confine yourself to just blue jeans there are so many different shades and finishes to choose that jeans is almost too simple a term to describe what is essentially a myriad of wardrobe choices. Nonetheless we are all able to identify a pair of blue jeans but how many of us know much about the history of the colour and how our jeans are dyed?

The blue colour in blue jeans that we all seem to love is indigo and natural indigo is quite possibly the oldest natural dye known to man. Ancient artefacts discovered in Egypt and South America have shown that the use of indigo as a dye dates back to as early as 5000 BC. Commercial production of the dye began in India and the name indigo is derived from the Latin term indicum which meant "from India". The dye was transported by Arabian traders to the civilisations of ancient Greece and Rome where it was prized as a luxury commodity.

Indigo's luxury status was due to its rarity which was a result of the low yield from the plants from which the indigo was extracted. These typically contained only 2% indigo. The dye can be found in a variety of species including plants from the Indigofera genus, woad and knotweed.

The indigo dye is not actually present in nature and must be created by converting Inidcan, a derivative of trytophan, which is found in the leaves of the plants. Indican must hydrolyse to release indoxyl which then becomes indigo when exposed to the air. One wonders how anyone ever discovered the dye! Happily someone did but the extraction process is far from simple. A series of tanks must be used to produce the dye. The right plants are placed into the highest tank with fresh water and they are left to ferment. The result is a yellow coloured liquid which contains the all-important indoxyl. This liquid is then transferred to a lower tank where it is stirred to expose the indoxyl to the air. The indoxyl then oxidises to become indigotin and settles at the bottom of the tank. The liquid is removed and the valuable sediment is transferred to a third tank where it is heated up. The heat prevents further fermentation before the sediment is filtered to remove impurities. Any waste products and excess water are used to irrigate the land. 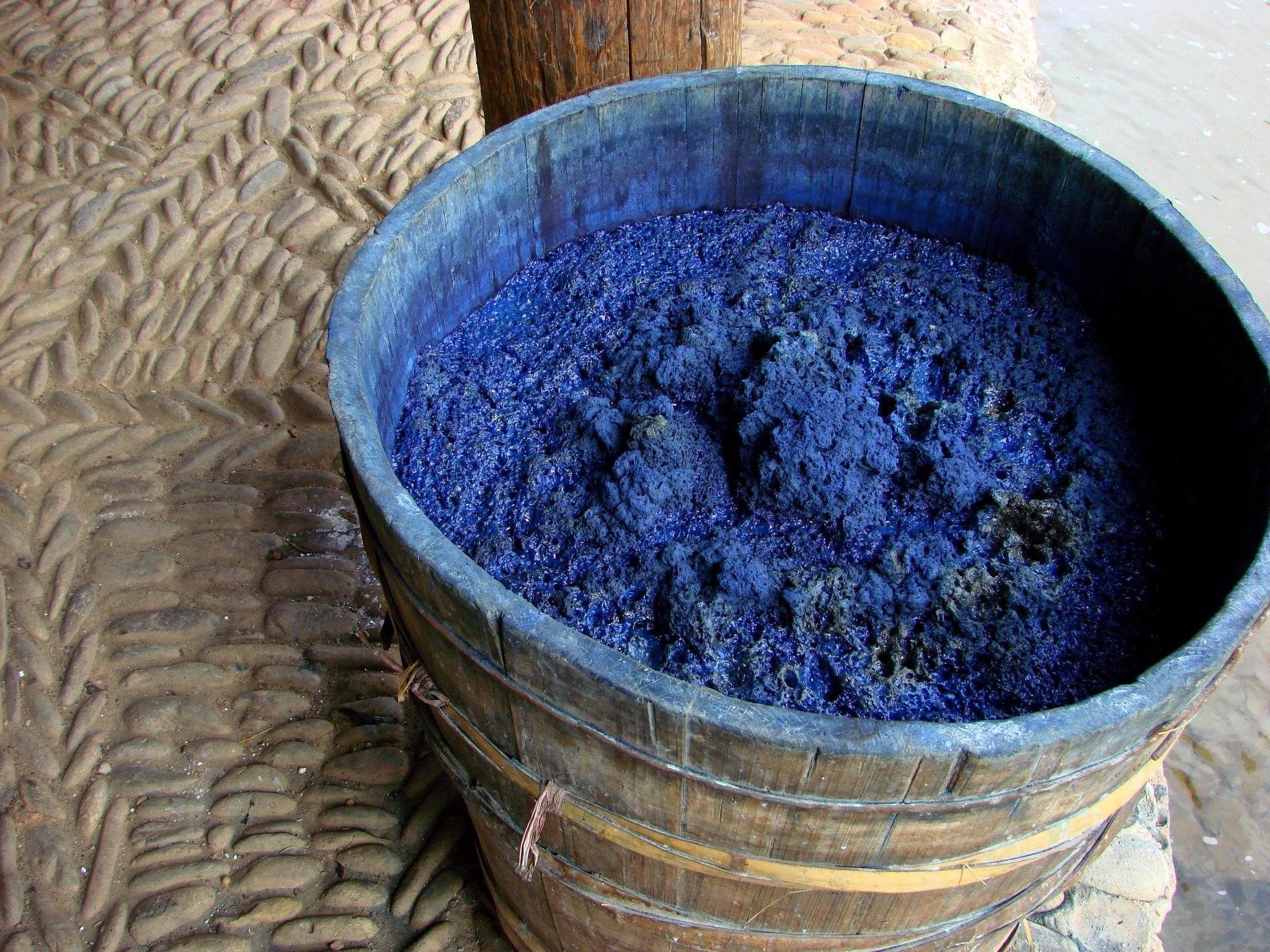 
Indigo was big business in India and by the 19th century over a million people worked in indigo production. During the Industrial Revolution in the West the demand for clothing increased and in the 20th century the popularity of denim added to the pressure for more indigo. The supply of natural indigo was limited and so the search for synthetic alternatives was inevitable.

In 1865 a chemist called Adolf Von Baeyer began researching the chemical structure of indigo. He managed to evolve a process to produce a synthetic dye but it was impractical and so BASF took up the challenge and created a new process which was commercially viable. By the end of the century commercial production of synthetic indigo dye had begun. Today most of the indigo dye used in clothing is synthetic with thousands of tons of the dye being manufactured every year but the chemical has not proved to be environmentally friendly. New techniques are being investigated in the attempt to minimise the impact of blue dyes on the environment. Some jeans brands are now making moves back to natural indigo too but there is a cost implication here which has limited the trend.

Jeans were not originally fashioned from denim. The first jeans type trousers produced by Levi Strauss were actually made from brown canvas but in an attempt to make the new work wear as popular as possible Strauss experimented by offering the jeans in a different fabric and this was a cotton twill called serge de Nimes. The name was later shortened to denim. Denim proved to be much more appealing than that brown canvas! Denim is woven in a process where the weft thread is passed under two or more warp threads producing the familiar ribbing and creating a very strong and durable fabric. Click here for a more detailed history of jeans.

It is only the warp threads which are dyed blue whilst the weft threads remain pale giving denim that signature look of blue on the right side and a much paler shade on the other side. It should also be noted that indigo dye colours the surface of the fibres but only partially penetrates them which is why denim fades with wear as the indigo is worn away. Indigo is actually a relatively colour fast dye for natural fibres.

So now you know! That wonderful blue colour in denim is indigo. Jeans are the world's favourite fashion statements and with so many styles, cuts and colours out there your choices are limitless. However, despite changing tastes, new trends and an increasing concern for the environment, everything always seems to come back to blue jeans and you will find plenty of these versatile little marvels here at Jean Store!