A Star is Born

On New Year's Day 2015 the hottest search term on Google in the UK was "Adam Lambert". This was a fairly extraordinary turn of events as Lambert had been flying somewhat below the radar in this country despite a successful solo career in the USA. So what changed overnight?

Adam Lambert was runner up in the 2009 American Idol talent show. The result caused some consternation as many people in the industry were already talking about Mr Lambert in rather glowing terms and believed that he should have won. However, much like the X Factor in the UK, fortune does not always most favour the winner of the show. Lambert began to forge a successful solo career with sell out tours and a number one album. The winner, Kris Allen, didn't exactly fade into obscurity but could not rival Lambert's growing success.

So Adam Lambert was high profile across the pond but not exactly headline news in the UK. Then on New Year's Eve the BBC broadcast a live concert featuring legendary rock band Queen fronted by Adam Lambert and it was this performance that got everyone busy Googling his name.

Lambert's incredible vocals, his stage presence and his glamorous image combined to make quite an impression. The singer had already achieved the seemingly unlikely victory of becoming the first openly gay artist to reach number one in the US album charts and now he had swept the UK off its proverbial feet. Personally I had never heard of the man before the Queen tour was announced but I had a Jerry Maguire moment on New Year's Eve. You know that bit when Renee Zellweger says "you had me at hello"? Adam Lambert had me at "Tonight I'm gonna have myself a real good time" which was the first line that he sung and the moment that I decided my wardrobe needed an overhaul!

It was also a moment in which I was profoundly glad that I had bought tickets for the forthcoming concert tour despite having had no idea exactly what I was going to see. Well now I knew!

Now we all understand that being able to sing is one thing but that becoming a star is quite another and is always about much more than a good voice. In truth Lambert possesses absolutely awesome pipes which would probably serve him well if he hit the stage in a bin bag. Throw in the charisma, the performance and the wardrobe and you set Google on fire!

Adam Lambert has managed to make theatricality and a fiesta of bling undeniably cool which is some achievement. High heels, glitter, a liberal sprinkling of sequins and plenty of nail polish really ought to be more Julian Clary than cool rock star but Lambert appears to have a fabulous talent for creating credible ensembles from sparkling seperates that light up the stage.

The look is Marc Bolan meets Elvis with a hint of Steven Tyler and overtones of Adam Ant. A fabulous fusion of rock glamour which is now much mimicked by Lambert's growing army of admirers who are dubbed the Glamberts. 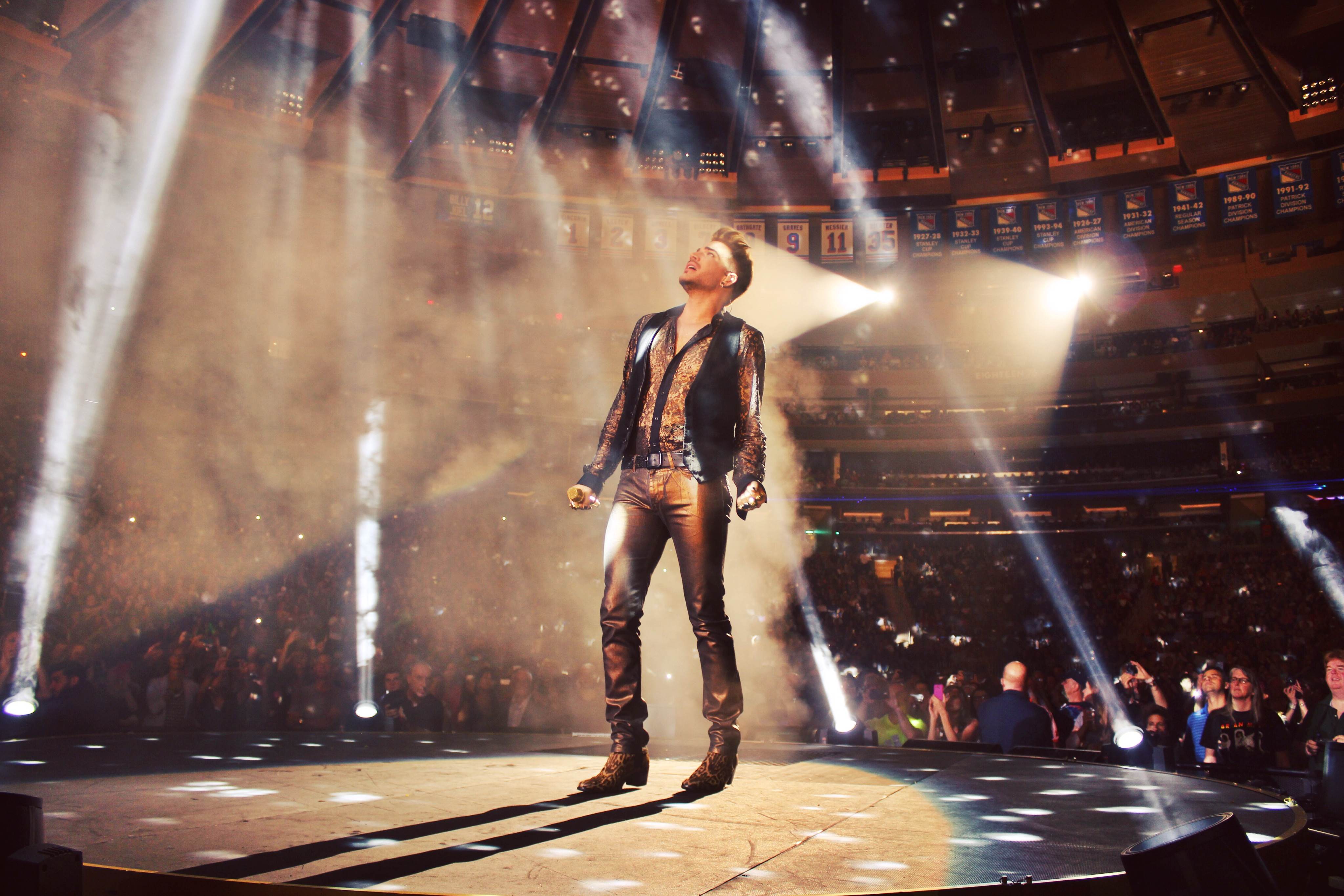 On stage Lambert sports a variety of jeans, often leather numbers, which usually have metallic elements and/or sparkle. These are partnered with a variety of shimmering shirts, leather or tailored jackets, heeled boots and leather fingerless gloves. When performing solo his wardrobe often looks like a throw-back to the 1980's with outlandish costumes and extravagant hats. He would have totally eclipsed the likes of Steve Strange and Boy George and that is really saying something! 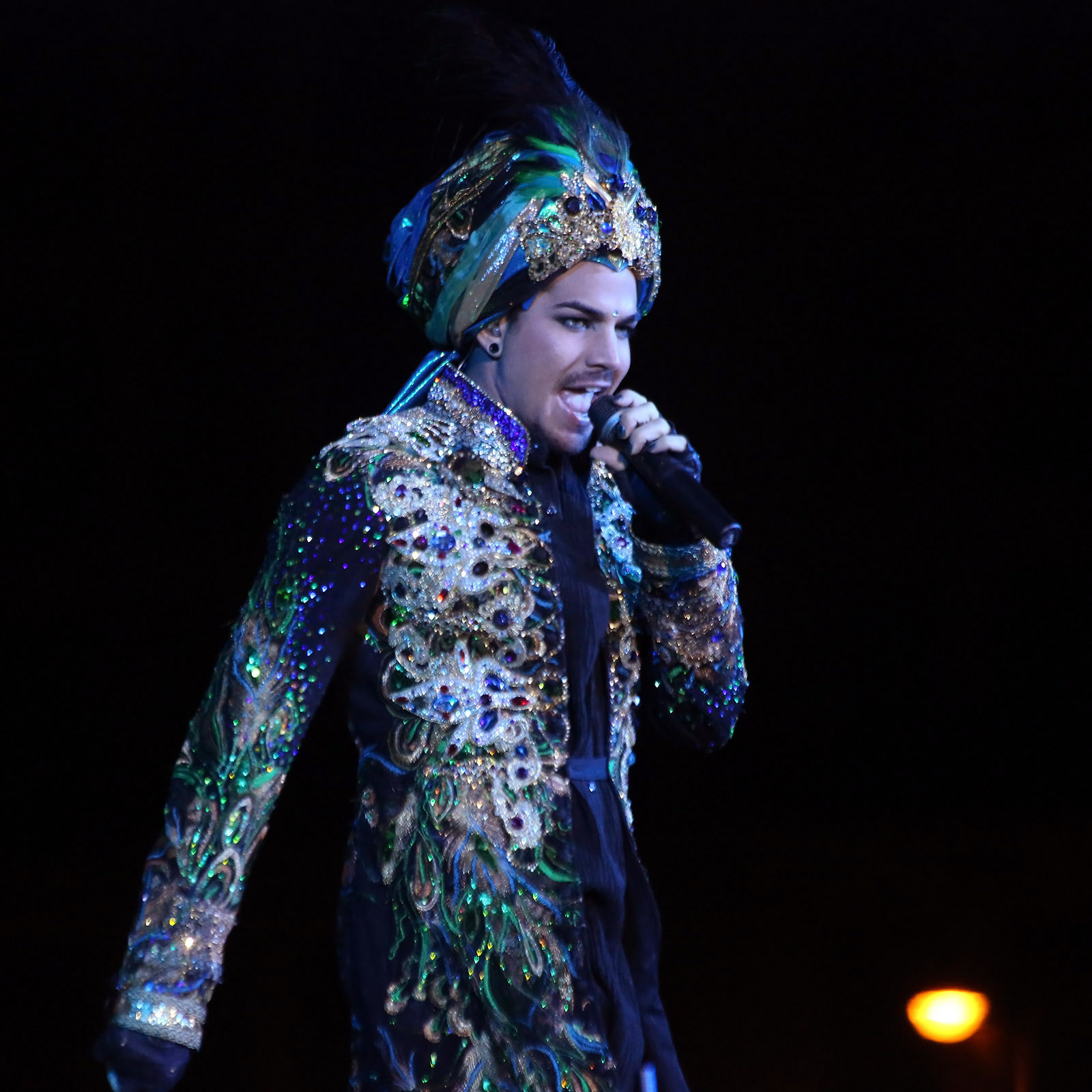 Off stage Lambert is a little more restrained but never boring. He favours leather, sharp suits, distressed jeans, funky shirts and yes, a little sparkle. He appears to be enamoured with Diesel, Rock and Republic, Saint Laurent and Skingraft. That amazing studded biker jacket that he wears is Versace. All just slightly beyond most people's budget!

I wouldn't want to suggest that Adam Lambert could somehow transform the fashion landscape on his own. Most men are never going to identify with so much bling. However, he is an influence and perhaps symptomatic of a change in the tide. The 21st century has not been notable for its experimental fashion but more for its muted colours and a progression towards ever more casual looks. Perhaps it is time for something a little more striking, or dare I say it, loud! Anyway sometimes rock stars and pop stars do inspire mainstream fashion. Look what happened when Pete Townsend of The Who started wearing Dr Martens on stage. Whatever happens the team at Jeanstore will have their fingers on the pulse.

God Save Our Gracious Queen

Adam Lambert had me with the first line of Don't Stop Me Now. He then sealed the deal when I saw him live by delivering a deliciously camp version of Killer Queen and quite the finest vocal I have ever heard with Who Wants to Live Forever. In answer to those who have said that he is no Freddie Mercury I would say that no he isn't. He is Adam Lambert which is quite spectacular enough in every way possible way.